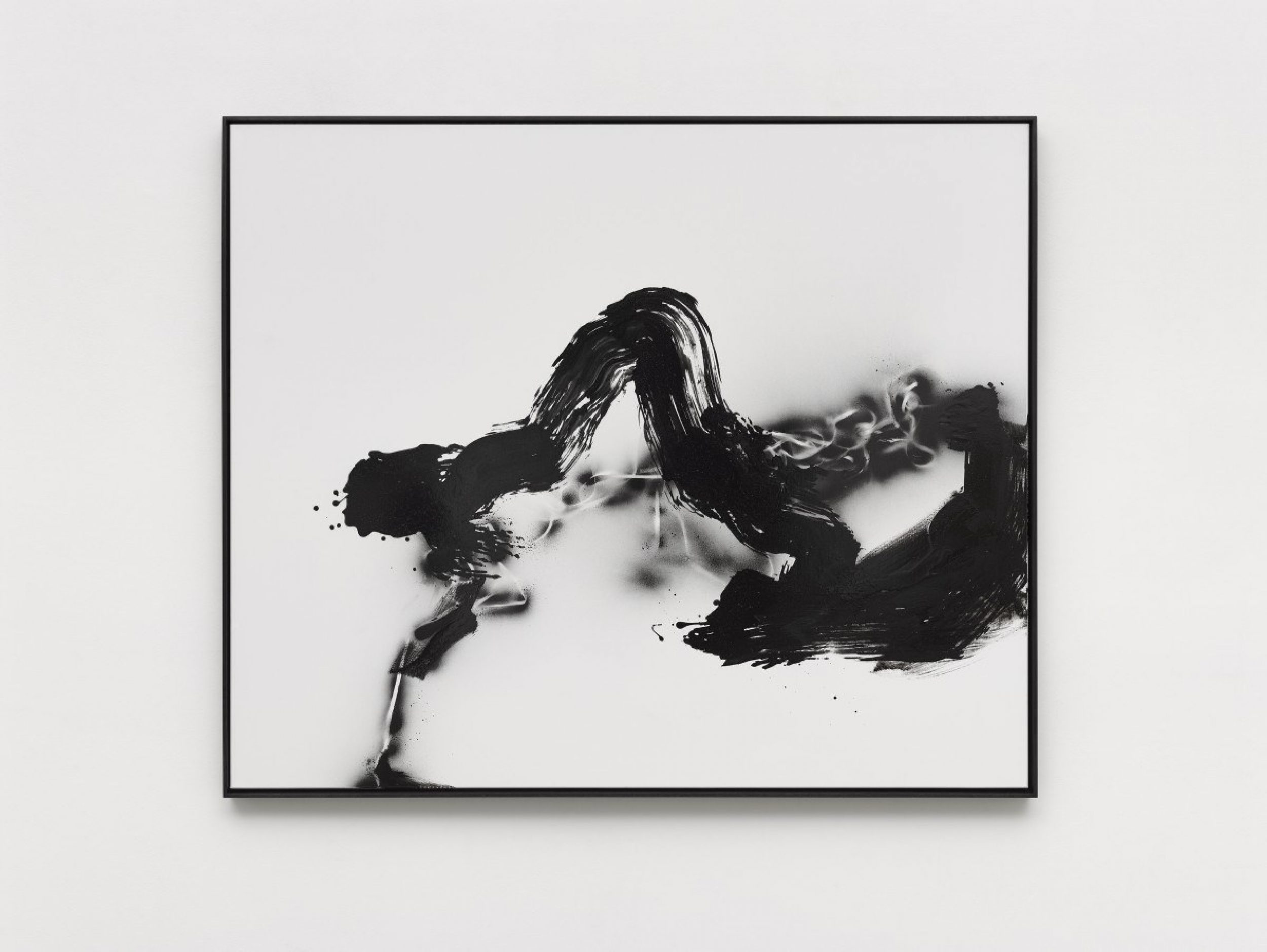 'No realm of thought... No field of vision'

“…Something like a lightning-bolt without beginning or end described a white-hot current of electricity through his veins and nerve-stems. When the pain overwhelmed the controls over his bodily functions, he heard himself laugh. It sounded like relief: no more thought that was the score. Adapting to the movements of the a-sensible. Eluding them. Anticipating them. Engaging them. Suspending oneself and not adapting. Adapting by not adapting.” Müller, ‘Heracles 2 Oder Die Hydra’, in Werke 2: Die Prosa (Berlin: Suhrkramp, 1999). Translation D. Redmond

White Cube Bermondsey is pleased to present ‘No realm of thought... No field of vision’, an exhibition of new work by Cerith Wyn Evans. Installed throughout all of the gallery’s spaces, it features installation, sculpture and painting that foreground the artist’s longstanding exploration of transcendence, translation and temporality.

In 9 x 9 x 9, fig. (0) (2020), a major new neon sculpture takes its form from drawings of the first helicopter designed in 1907 by Paul Cornu. Insectile drone, part cyclical and satellite in nature, the work is suspended from the ceiling in the manner of an aeronautical museum display. By referencing ‘fundament through firmament’, it points both to the diagrammatic foundations of early self-propelled flight and Evans’ own first neon sculptural commission entitled Arr/Dep (imaginary landscape for the birds) (2006), a visualisation of intersecting global flight paths installed at Lufthansa’s headquarters in Frankfurt airport.

A focus on early 20th-century sculptural and mechanical form continues in several new works exhibited in the North galleries. Evoking Marcel Duchamp’s work The Bride Stripped Bare by Her Bachelors, Even (1915–23), three large folding screens incorporate multiple fractured glass panels (Folds…in shade (also light and shade) (2020). Held in place by a dark lacquered bronze frame, echoing the encasement of Duchamp’s sculpture, their fissures can be read as a transversal visual trajectory; a continuous design that unfolds across its sections, from leaf to leaf, in the same manner as a narrative painting on a traditional Japanese Byobu or ‘wind wall’. Likewise, a series of new mobile sculptures adopt the idea of compromise as a creative element, featuring vehicle wind-screens – visor shaped, curved pieces of glass – that are cracked and spot-lit to create a multitude of refractions in motion. Connecting chance procedure with perspectival plotting revolving in limbo, Evans draws upon the nuanced history of Duchamp’s sculpture, which broke while in transit, following its first exhibition. The uncanny cracks in the glass prompted Duchamp to embrace this potentially disastrous event as part of the works’ final resolution, welcoming the cracks to ‘repair’ and now ‘complete’ the work.

In South Gallery II, a vast architectural wall of neon cuts diagonally across the space, comprising an extract from ‘Sodom and Gomorrah’ (1921/1922), the fourth volume of Marcel Proust’s novel À la recherche du temps perdu, here translated into Japanese by Kazuyoshi Yoshikawa (2010). Presenting vertical rows of the Japanese kanji characters, read from top right to bottom left, this linguistic veil features an aperture allowing the viewer to walk through, as if passing through a curtain or screen. Proust’s passage, here partially obscured and transposed into a different set of characters, describes in detail the movement of water through an 18th-century fountain redolent of a representation by 18th-century painter Hubert Robert. Proust’s layered and erotically charged description charts the relationship between what is seen and seeable.

Behind the wall, three chambers with 17 directional glass-panel speakers are suspended in loosely interlinking pentagon, hexagon, septagon and octagon formations. Titled Pli S=E=L=O=N Pli (2020) each panel emits an improvised and composed piano sound track performed by Evans (over two recording sessions, 10 years apart, 2008 and 2018). Varying in length, the whole piece is constantly self-generating (out of sync) and audibly shifting within its setting.

Adjacent, we encounter a new series of neon sculptures; …take Apprentice in Sun I-IV (2020) that present a staggered and multiple light drawing in four distinct parts. A graphic tangle of multiple trajectories trace the lines and shadows in a photograph the artist took of Duchamp's ‘assisted readymade’, Bicycle Wheel (1913) at the Museum of Modern Art, New York. Relating to Evans’ earlier series of neon sculptures that drew from the codified movements of Japanese Noh theatre, in these new works, multiple partial and fragmented shadows of the bicycle wheel and the stool upon which it sits, can be discerned among many other vectors, all of which appear to intersect or exist on numerous dimensional planes. Mechanical and architectural in feel, they remain in constant flux, liable to change and mutate in and around their traceries.

Composition for Flutes (2017), consists of 11 crystal flutes connecting to undulating clear acrylic tubes controlled by two ‘breathing’ units, all suspended from the ceiling by threads and cables. This automaton emits a mellifluous, pulsating tone further exploring ideas of the mechanical and physical body.

In South Gallery I, four new monochromatic paintings employ the confluence of chance and control, featuring sweeping brush strokes in black gloss and emulsion overlaid by diaphanous sprayed acrylic or varnish – they embody the gestural ‘event’ across their surface. Partly related to Evans’ earlier ‘automatic drawings’ (2008), their design appears to emerge from a number of forces unleashed in play which, somehow, are outside of the artist’s precise control. In the same space, a pair of pleached trees brush beside one another as they rotate on turntables at barely perceptible speeds. Lit by two spotlights, they make reference to the earliest mechanised forms of the moving image; a shadow play towards the literal ‘son et lumière’ (sound and light) or the flicker of early cinema.

Two ‘neon’ works, here produced in Krypton gas, Space called Place (after RD) and …)( …in Krypton (2020) present a diagrammatic transition of space in the form of a Tesseract or four-dimensional analogue of the cube and two superimposed ‘bowtie’ shapes. The latter references the repeated spatial perspective forms of Dutch painter René Daniëls, which became a common ‘bowtie’ motif within his paintings. In turn, Space called Place (after RD) can be interpreted as a diagram of the actual space – its two walls, flanking the long corridor receding and converging towards a central focal point – here, read as a blind spot, that is at once a-spatial and a-signifying.